It’s their sixth album, and it’s out now! These guys bring a new meaning to the word Irish. This CD has got to be the BEST one they’ve recorded yet!

The music still energetic, playful, the kind of punk sound that just makes you from time to time want to mosh too. The rockabilly sound along with bagpipes make theses guys hard to really categorize, but one thing is for sure they kick major ass. What more do you want me to say?

Got complaints? Hey lets see you try to categorize these guys. And really what’s with categories? All you need to know is that this is their best album yet and you should be skating your lazy bum to the store to buy it!

The lyrics playful easy sing along to hey lets all get drunk what ya say, especially in “Kiss Me I’m #!@* Faced.” Comical singing in a bar, the leads voice is harsh and horse but ehh with this band it all sounds great together.

Along with all the great weird catchy tunes and lyrics you get da da da a bonus DVD! OOOO shiny! With the DVD your get Music Videos! That’s right who needs Mtv or any of that commercialized junk when you can see it and get the album at the same time! It also includes live footage of the Dropkick Murphys from St. Patrick’s Day 2002, and more! What a deal I say!

I’ve said it all through this review, buy this album…as unusual as it maybe its one that your most definitely love. You can also check these guys out on tour with The Sex Pistols! 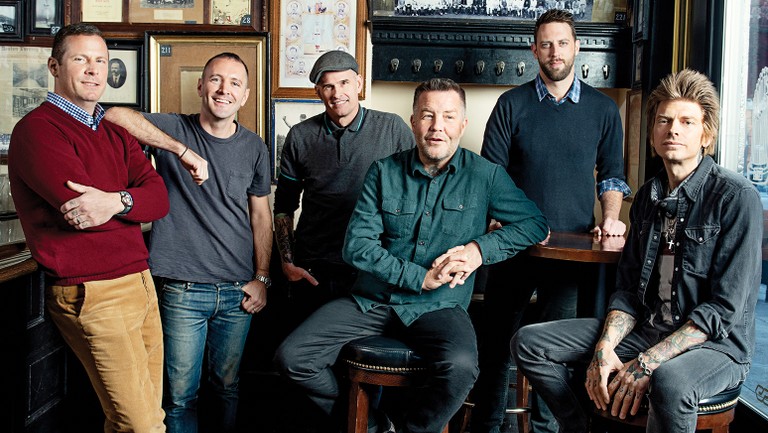 The new release is finally upon us, everyones favorite irish punks the Dropkick Murphys Warriors Code is nothing impressive. These guys have impressed us in the past, which might explain how huge they are getting. I saw a commercial for this cd on ESPN, what does that tell you/ Still i love these guys, but they need to remember how to write a good drinking song.

This cd may or may not be better than Blackout it’s close either way you look at it. The songs don’t have the melodies that pervious albums saw. Understand this cd is mainly a tribute an old boxer of Boston named Micky Ward, honorable by all means but they’ve had better songs about fighting than the track “Warriors Code”. I can say that as a band they do sound tighter than they have before, which is great, let’s hope they use that to write better stuff next time.